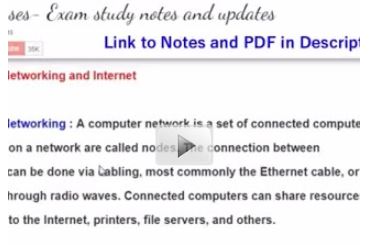 Computer Networking : A computer network is a set of connected computers. Computers on a network are called nodes. The connection between computers can be done via cabling, most commonly the Ethernet cable, or wirelessly through radio waves. Connected computers can share resources, like access to the Internet, printers, file servers, and others.

1.Server – a computer designed to process requests and deliver data to other (client) computers over a local network or the Internet.

2.Receiver – a hardware module or device used to receive signals

Simplex channels – simplex is a communications channel that operates in one direction at a time.

Full duplex channel – Refers to the transmission of data in two directions simultaneously.

Cable is one way of transmission media which can transmit communication signals.

Routers is used to join multiple computer networks together via either wired or wireless connections.

Gateways is a key stopping point for data on its way to or from other networks.

Wide Area Network(WAN) – a computer network in which the computers connected may be far apart.

Metropolitan Area Network (MAN)- A metropolitan area network (MAN) is a network that interconnects users with computer resources in a geographic area or region larger than that covered by even a LAN but smaller than the area covered by WAN. Ex- Public Networks Public Switched Telephone Networks (PSTN) Public Service Digital Network (PSDN)

Protocol – It is set of rules and standards which is used by computers to exchange data or information with each other across a network.

Nodes – It is a connect point where either data transmission ends or redistribution of data starts.

File Transfer Protocol (FTP) is a standard network protocol used to transfer computer files between a client and server on a computer network.

Internet service provider (ISP) is an organization that provides services for accessing and using the Internet.

Web server is a program that uses HTTP (Hypertext Transfer Protocol) to serve the files that form Web pages to users, in response to their requests, which are forwarded by their computers’ HTTP clients.

Website is a collection of related web pages, including multimedia content, typically identified with a common domain name

Web Page is a hypertext document connected to the World Wide Web.

Hyperlink is a word, phrase, or image that you can click on to jump to a new document or a new section within the current document.

Wireless Application Protocol (WAP) is a technical standard for accessing information over a mobile wireless network.

URL (Uniform Resource Locator) is a form of URI and is a standardized naming convention for addressing documents accessible over the Internet and Intranet.

Modem – a combined device for modulation and demodulation, for example, between the digital data of a computer and the analogue signal of a telephone line.

Web Browser – Web browser is a software application used to locate, retrieve and display content on the World Wide Web, including Web pages, images and video.

Office Open XML (OOXML) format was introduced with Microsoft Office 2007 and became the default format of Microsoft Word ever since. Pertaining file extensions include:

.docm – Word macro-enabled document; same as docx, but may contain macros and scripts

.dotm – Word macro-enabled template; same as dotx, but may contain macros and scripts

Office Open XML (OOXML) format was introduced with Microsoft Office 2007 and became the default format of Microsoft Excel ever since. Excel-related file extensions of this format include:

.xlsm – Excel macro-enabled workbook; same as xlsx but may contain macros and scripts

.xltm – Excel macro-enabled template; same as xltx but may contain macros and scripts

Microsoft Excel uses dedicated file format that are not part of OOXML and use the following extensions:

For a more extensive list of extensions, see Microsoft_Access § File_extensions.

ACCDE – The file extension for Office Access 2007 files that are in “execute only” mode. ACCDE files have all Visual Basic for Applications (VBA) source code hidden. A user of an ACCDE file can only execute VBA code, but not view or modify it. ACCDE takes the place of the MDE file extension.

ACCDR – is a new file extension that enables you to open a database in runtime mode. By simply changing a database’s file extension from .accdb to .accdr, you can create a “locked-down” version of your Office Access database. You can change the file extension back to .accdb to restore full functionality.

If any one wants to get PDFs by Navclasses then click here: https://www.facebook.com/groups/navclasses/files/

Get subscription For complete Paper 1 and Paper 2

Just leave everything on me i will teach completely with revision

You will surely get confidence to crack JRF with my courses

> Will provide All PDFs

> NO need to buy additional book

> Navdeep Kaur’ classes are of 2 hour each

> Can ask queries in live

> Can watch all courses launched in subscription

> No need to pay separately

> can watch live, see recorded from laptop and mobile both